But what about philosophy? This is how I see philosophy's role in our understanding of the world: 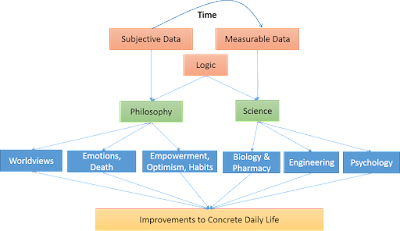 The abstract thinking of science has improved daily concrete life through technology. Developed from understanding of biology, from psychology, or from methods for engineering.

But what about some of the subjective data? The data which we experience (or at least think we experience) but for which there is little measurable data? Examples include death and free will. Therein lies the benefit of philosophy. By using logic and our subjective experiences, philosophy can offer changes in worldviews leading to a different interpretation of death Or by understanding our awareness of our emotions, we can choose to interpret them differently. Or by believing in the concept of choice or willpower, we can implement changes in daily life resulting from optimism, empowerment, and changes in our daily habits.

That's why, at the end of several blog posts, I try to describe how a given philosophical idea can change one's daily life.  For example, at the end of my Field of Choice post, I described how the concepts of anxiety and depression can be reinterpreted given this idea. At the end of my thoughts on adaptation, I made sure to describe how the concept can be used to make sustainable improvements towards one's goals. It's important that philosophy better daily life.

There is a trend. As society develops, more and more data moves from the form of subjective data towards measurable data. The pretty dots in the night sky used to be just the subjective experience of photons hitting our eyes. But as we developed the telescope (and more sophisticated variations nowadays), we saw the luminance of stars and planets.

It's in these moments, when experiences move from subjective to measurable, that philosophy has to keep up or be dismissed. I will admit that I do not understand (nor do many physcists) the subtle implications of recent developments in quantum physicists, simply due to the time it would take to learn the math behind it. An example of some concepts I have a some grasp on are dimensionality slicing and the many-world's hypothesis. Combining them with quantum probabilities, allowed the concept a 5-dimensional universe as the physical structure. But philosophy must not exclude any measurable data, and it's possible that there is a proof in some physics paper of which I am not aware which renders that idea completely false.

Currently there is almost no measurable on the possible subjective experiences of death and free will (if they even are real experiences), and those are therefore two major topics in philosophy. But as more data on death becomes available, whether due to biological understanding of apoptosis, or through physics' understanding of Schroedinger's cat, the need for philosophy will start to become obviated.

When we get to that point in society, it will be a completely different way humans choose to spend their time, and interpret the universe. Once there are very few philosophical wonderings left, and once science has enough measurable data to make us feel the emotions we want, for example, and to know what happens after death, our way of living will change. For better or for worse remains to be seen, and I'll offer no prediction on that.
Posted by Unknown at 9:26 PM