I just got an email saying that my TEncryption program is going to be hosted on softpedia (http://mac.softpedia.com/get/Utilities/TEncryption.shtml).

It was 3 years ago that I created this program, and completely forgot about it until today. I made it open source, and wrote it in java (so it's platform-independent). It's my own algorithm up to 2^31 bit encryption (only because of memory issues); feel free to look at the source code to learn how it works.

I basically just want to say a little bit about an idea I developed for extending fixed-length hash algorithms to be variable-length hash algorithms. TEncryption used MD5, which I will probably have to change to SHA2 due to the fact that MD5 has been shown to be weak. However, the idea I had (outlined below) is generalizable to any hash algorithm, so that shouldn't be a problem.

The basic flow of symmetric private key encryption is as follows: 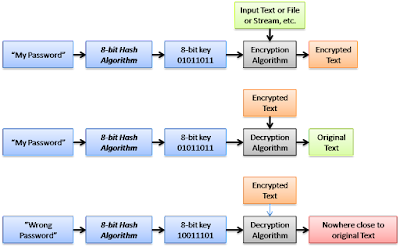 A problem arises, however, when you want an 8-bit private key, but only have a 4-bit hash function available. The steps outlined below are how I overcame this problem. 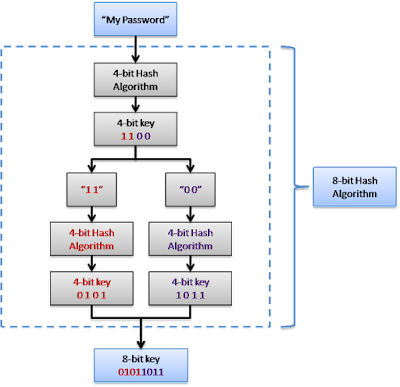 Perhaps in another post I'll explain my underlying encryption algorithm I created but I'm not in the mood right now. Like I said, the source code is all there.