This blog post is an amalgum of my series on senses and consciousness and my posts discussing the physics of the universe.

Once we delve down into the structure of the universe, we hone in on time (the present moment), we hone in on space (subatomic particles and forces), and yet we see that there is an additional component: probabilities.

What if we defined probabilities as the fifth dimension? As in: matter/energy moves through time (and therefore the past and future are real and can be connected via wormholes), but also moves through probabilities (there are different probable energy levels that energy lives in).

Gravity and quantum mechanics are irreconcilable right now, possibly because gravity explains spacetime as a four dimensional universe, and yet quantum mechanics deals with probabilities. Einstein had a lot of trouble believing that God would play dice with the universe, as per his famous quote.

I already presented the idea that we are aware of probabilities through our willpower. But what is willpower exactly? What exactly are we aware of?

I believe that we are actually aware of our motion through the fifth dimension.

We visualized our four dimensional universe last year as a single block. 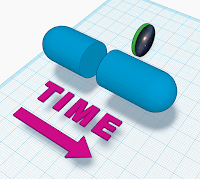 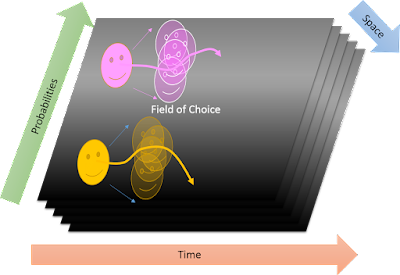 Our lives through a four dimensional universe would simply be a straight line through the Field of Choice. But then you would simply be a passive observer, possibly only making decisions based on the highest probability.

Now imagine a curve moving through the fifth dimension, not just the three spatial dimensions, as time progresses. We would constantly have to be making choices, visualizing possible futures.

We can take our theory of pattern recognition being seen as another sense into the future, as actually a sense into both the fourth and fifth dimensions. We can see the future, and also other “nearby” choices.

This the true multiverse. Physicists discuss the possibility of multiple universes existing simultaneously with different probable outcomes, and that's simply what I refer to as the Field of Choice. To define that multiverse, we simply have to define an additional dimension of the universe as the probabilities.

This theory also explains how we have free will, as well as have subjective experiences which observe the state of the universe. Our motion through the multiverse is how our free will operates.

Now that we can visualize how free will may operate through a multiverse, let's discuss possible ways in which this could affect our mood and our day-to-day interactions.
An instinctual awareness of a fifth dimension has even permeated our language. “If I choose X, I go down one path in life. If I choose Y I go down a different path.” That’s our minds naturally and instinctually being aware of the fifth dimension of probabilities and the fact that we can carve out different curves through the multiverse, not just a straight line.

I understand that it's entirely possible that there's determinism, and that the universe simply chooses for us the highest probability events. Yet it's also equally possible that by believing in a five dimensional universe (or however many spatial dimensions our physicists find plus time and probabilities), this allows free will to operate within the current paradigm of physics.

In addition, if time travel were to exist, this concept of free will and choice as a fifth dimension could resolve the grandfather paradox. If you go back in time, your willpower is essentially carving a new path in a parallel universe. There's no paradox if there's a fifth dimension.

When physicists discuss a multiverse, for those who understand what a dimension truly represents, they are simply discussing slicing (a type of dimensionality reduction), along the fifth dimension. The parallel universe hypothesis is nothing more or less than a recognition of probabilities being the fifth dimension.

Even our empathy is simply an understanding that there are other beings with free will also navigating this Field of Choice, allows us to have a sense of morality.

This is what Buddhists talk about when they discuss how we're all in this life together and make the entire world of sentient beings their in-group. Also the concept of reincarnation can be related to the idea that our awareness moving through the Field of Choice will find another entity to be aware of after the death of our neurons. This is what Christians talk about when they discuss that God is omnipotent, as He would be a being capable of navigating and seeing this entire Field of Choice.

It's a working possible way to reconcile some inconsistencies between gravity, quantum probabilities, religion, free will, morality, and self-awareness, with some possible real-world implications of this philosophy in regards to psychology and how to live one's life.

That's the takeaway for how philosophy can affect your day-to-day interactions, choices, and emotions.
Posted by Unknown at 1:49 PM